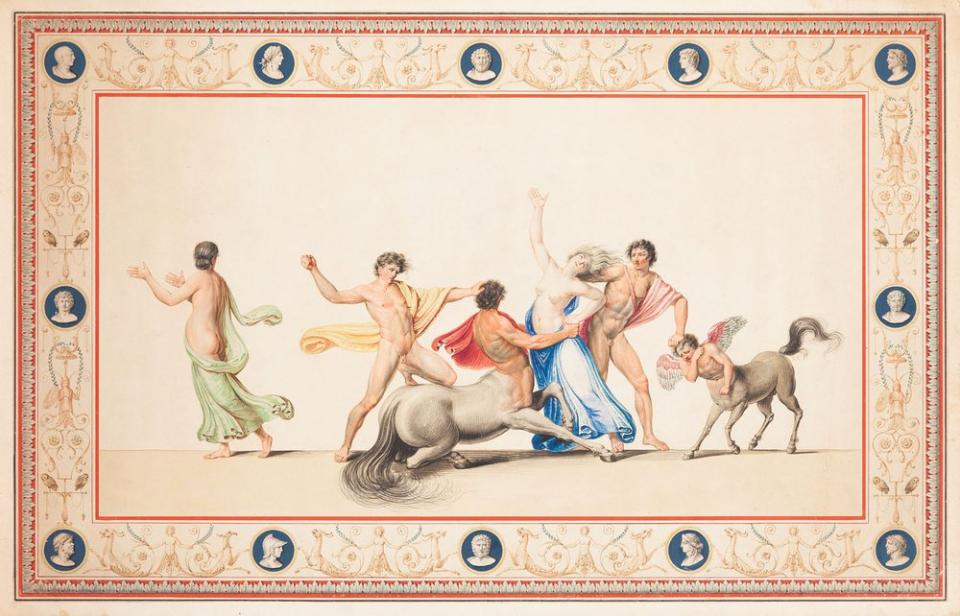 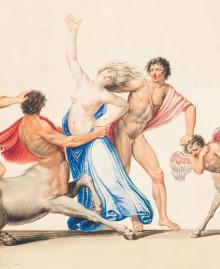 Watercolour over etched outline; paper pasted onto Quadro cardboard, referencing vault ornamentation in room 27. One of 30 copies from the luxury colour publication. At the time of publishing, a single print was worth twenty times more than a black and white version. The etching outline and work combined can be considered an autograph piece.

To put it briefly, The Abduction of Hippodamia depicts circumstances of a guest invited to a solemn ceremony (in this instance, a wedding) becoming inebriated and wreaking havoc, which is exactly what transpired at the nuptials of Hippodamia (daughter of king Oenomaus) and Pirithous. It is common knowledge that one best not invite Centaurs to any ceremony, as their social and behaviour skills are poor.

On this particular occasion, the Centaur Eurytion got intoxicated and decided to abduct the bride. Holding her around the waist, he attempts to forcibly take her away from the newlywed Pirithous, Theseus attacking the drunken Centaur. Everything would ultimately end well, the Centaurs soon to be dismissed from the wedding ceremony. The simultaneously static and dynamic positioning of most characters is rather striking; rendered in dynamic motion, they seem uncannily static in a typically classicistic feature – however heroic an act may be, it must always convey due and proper solemnity.

The plate originates from Vestigia delle Terme di Tito e Loro interne pitture, one of the most important 18th-century publications describing ancient vestiges. In all actuality, it portrayed the interiors of Nero’s Golden House (Domus Aurea), contemporaneously confused with Caesar Titus’ Baths erected upon Golden House ruins. Franciszek Smuglewicz, eminent artist of the Polish classicism and beneficiary of a stipend funded by King Stanislaus II Augustus of Poland, participated in works to produce the tome. The book was published in two versions, one black and white, the other in colour, the latter in a mere 30 copies and twenty times as expensive. Its price must have been considerable in view of the fact that it its cost was equal to six months of spending money afforded to Stanisław Kostka Potocki (Polish noble, politician, intellectual and patron of the arts) during his first travels around Europe in 1772. Illustrations originating from the Vestigio colour version are a great rarity, preserved in collections of just six museums worldwide.

The history of the colour edition includes curious information associated with the process of its creation. A graphic arts collector may spend a long time gazing at the print in search for etched lines. Their eerily painted look may well lead the viewer to a conclusion that he or she is simply looking at Smuglewicz’s finished colour drawing. The truth lies in the middle, and yet it does not, not entirely. This is a work on paper, “applied” onto a graphic frame. An etching plate was used, outlines subtly marked thereon, sufficiently understated for such works to be frequently catalogued as gouache and watercolour on paper. And no wonder: what we have here is painting following an etched contour (Marek Wasilewicz).