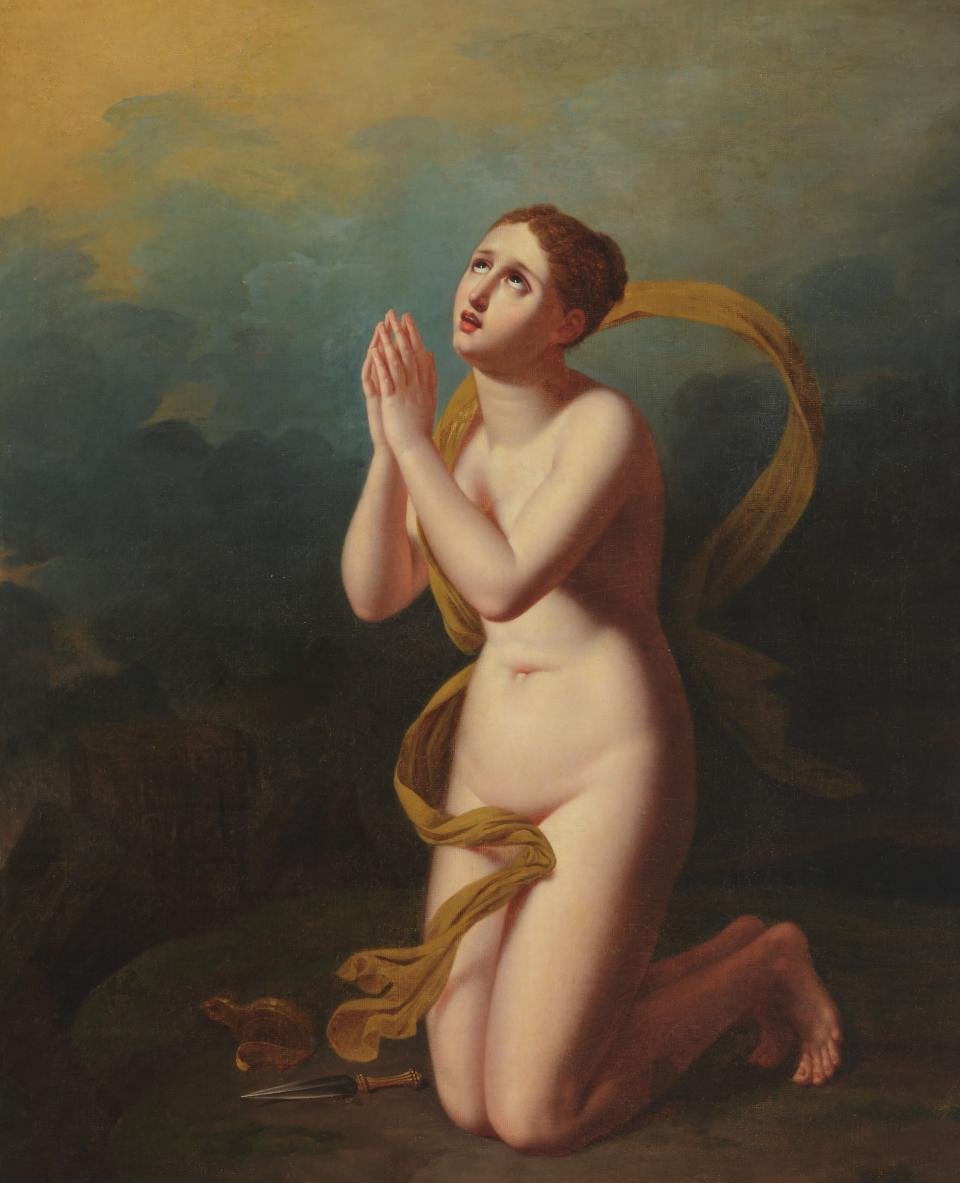 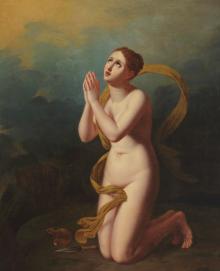 The painting of a naked woman knee-bound on a rock has a rare, interesting iconography. The woman’s hands held as if in prayer, her skyward gaze show that the pictures shows a woman in prayer or one that is thanking the heavens, while the items laying on the ground nearby – a broken shackle and a dagger – bear testimony to her saying thanks for her liberation. These elements suggest that the story in the painting is based on the mythological tale of Andromeda. The Greek myth has it that Andromeda was an Ethiopian duchess renowned for her exceptional beauty who was sacrifices to a sea monster by her father in a bid to subdue the wrath of Poseidon and the Nereids. The girl was chained to a rock, where she was found by Perseus who fell in love with her and killed the sea monster. The chains and shackles smashed, Andromeda was released. The painting offers a unique interpretation of Andromeda’s story. The lovely girl is portrayed right after she had been liberated and only a couple of the above items (the shackle with which it had been chained and Perseus’ dagger) provide any reference to her story. The posture of the girl and the overall mood of the painting are quite peculiar as well: never before has this mythological character been seen as an embodiment of humble gratitude without any erotic connotations. In essence, Andromeda’s story in this work of art is merely a pretext for the allegory of Release, Liberation that might even have had some political undertones. The gaze of the girl liberated pointed toward the sky that radiates a golden light that floods her figure brings her closer to the conventional images of saints, signifies trust in God-sent relief. The specifics of the artistic languages and the stylistics of the piece date the painting with its academism properties to the 1st half of the 19th century. With its certain characteristics, such as type, the painting style of the model’s lips and eyes, the subtle play of light in modelling the shapes, the overall manner of the paintwork, this painting resembles The Penitent St Mary Magdalene, the famous canvas by Władysław Niewiarowicz (Jonas Tisevičius), yet the final attribution is burdened by the fact that The Penitent St Mary Magdalene is not Niewiarowicz’s stand-alone piece but rather a replica done by him. Nonetheless, it is still likely that the work of art was painted by Niewiarowicz, possibly during his studies in Vienna (Dr. Rūta Janonienė).