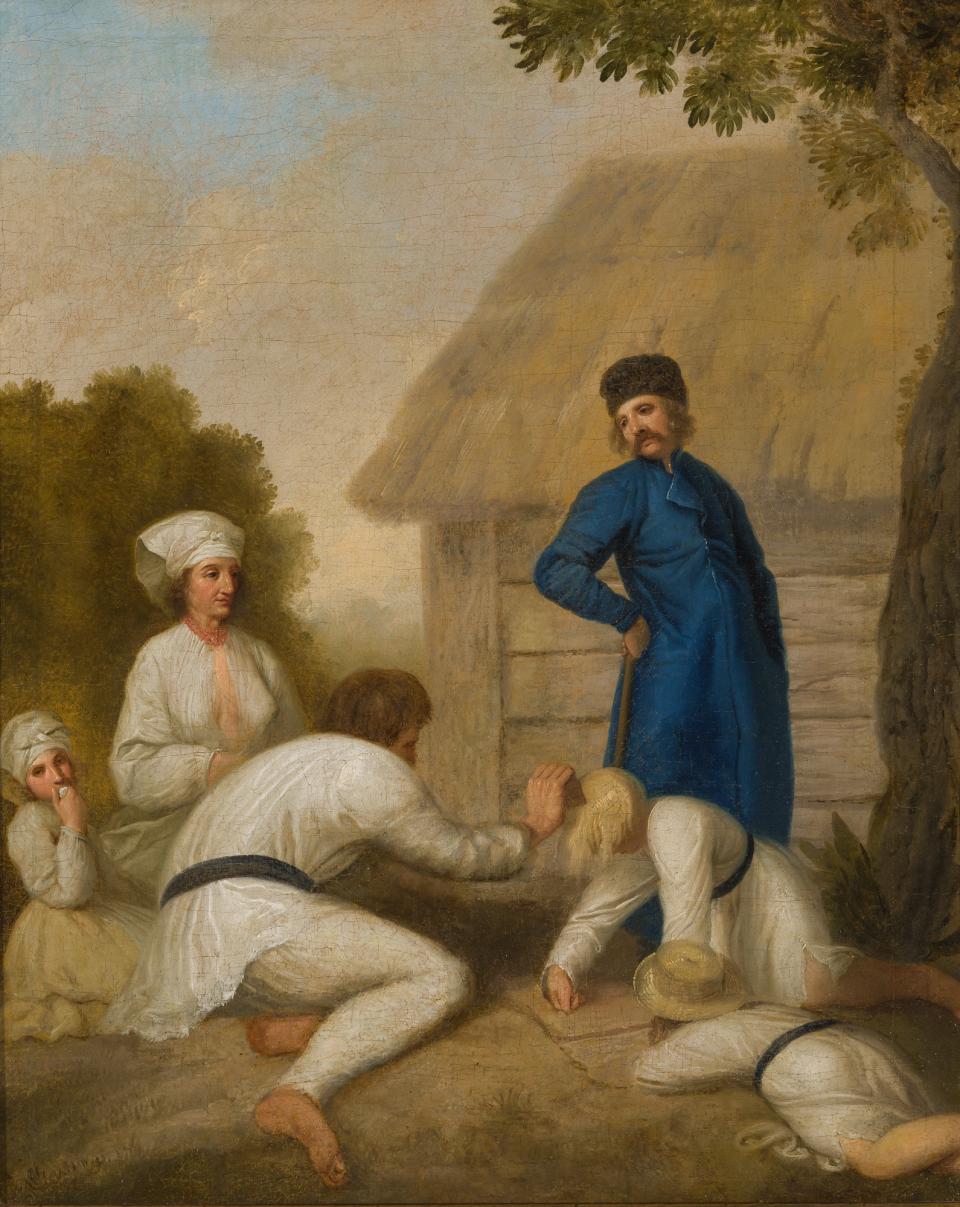 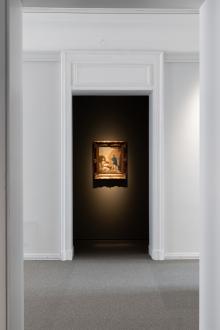 The painting depicts an everyday scene from peasants’ life. A family of peasants is sitting on the ground in the yard of their farm, the father is brushing his son’s hair, and the child, in an easily recognizable motion, is crushing lice falling out of his hair. The whole family is wearing light white linen clothes with black sashes tied around their waists. The woman and one of the girls have scarves around their heads, while the youngest daughter is wearing a straw hat. Watching the scene before him is the foreman, standing in the background of the painting, but easily spotted by a viewer nevertheless, as he is depicted wearing a bright blue župan. The landscape is not very detailed - we see the corner of a wooden, straw-roofed farmhouse, a fragment of a big tree growing nearby and some shrubbery painted in the opposite corner of the picture. All these elements are essentially just the background that helps construct the composition and bring the people into focus. The painter devoted all his attention to conveying the scene itself; carefully painting the faces, depicting the type of the clothing relatively accurately, though not pedantically. Most likely, a specific event was captured in the painting, a scene from the time when the hygiene of estate’s peasants was taken into consideration. However, this also reflects the general tendencies of the Enlightenment: greater attention devoted to the peasantry, concern over the quality of their everyday life.The nature of the painting technique, the style of the picture, even the character prototypes and the face modelling technique are all characteristic of the painting style of Pranciškus Smuglevičius (Franciszek Smuglewicz). Historical data also points to his authorship. Smuglevičius began painting everyday scenes from the lives of peasants back in 1776–1784 while living in Italy, later creating a few more works of the same type in Poland and Lithuania. Two paintings from Smuglevičius’ travel book, dated in 1784 and showing “Peasant Household Scenes” were in the collection of J. I. Kraszewski, while the Lithuanian Art Museum stores a famous picture titled “Lithuanian Peasants”. In addition, there exist two known versions of a painting that depicts peasants of Krakow in a tavern. The collection of Stanisław August Poniatowski held two paintings called “Polish Peasants with Children”. The famous politician, social activist and writer Hugo Kolataj (Hugo Kołłątaj) had not one, but two peasant-themed works of Smuglevičius in his collection, sold in 1795. A detailed description of the collection was prepared for this occasion. The description mentions a total of four small paintings, one of which description perfectly matches the scene depicted here: “the painting shows a Lublin peasant, sitting among his family and brushing his son’s hair”. Its companion piece was another picture, showing peasants of the Lublin region walking. The remaining two paintings depicted the Krzeszowice manor: one showed a Pauline Father, priest Bžezinskis, taking a stroll in the manor’s park, together with Miss Teresė Grečinska and a beggar, while the other painting showed the promenade in Krzeszowice and Jewish people sitting there. The Czartoryski Museum in Krakow is currently holding a painting attributed to Antanas Smuglevičius, which can be easily compared to the image of Krzeszowice that was in the collection of Hugo Kollataj. Also noticeable is the obvious similarity in style and colour to the painting “From Lithuanian Peasants’ Life”, so a statement can be made that both works are from the former collection of H. Kolataj and were created by the hand of Smuglevičius. The town and estate of Krzeszowice are near Krakow, where the construction of the manor was started in 1788 by a famous aristocrat and patron of the arts Izabelė (Elžbieta) Čartoriskytė Liubomirskienė, married to marshal Stanislobas Liubomirskis. As V. Drėma states in the painter’s biography (1973), P. Smuglevičius could have visited the Krzeszowice manor in 1789, when he was invited by H. Kollataj to paint altarpieces in the nearby Krzyżanowice parish church. Perhaps that was when he painted the portrait of Izabelė Liubomirskienė, later kept in the collection of Adomas Giunteris in Dobrovlėnai. Incidentally, I. Liubomirskienė is known to have been a patron of the peasantry, so it is possible that “From Lithuanian Peasants’ Life” could have been painted in her other manor. In any case, one may claim that the idea for these paintings was born in the environment of aristocrats and intellectuals, propagating the concepts of the Enlightenment (Dr (hp) Rūta Janonienė, Senior Researcher, Institute of Art Studies, Vilnius Academy of Arts).