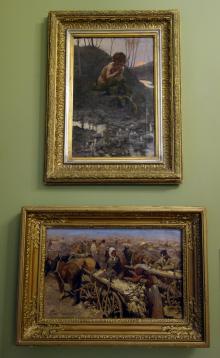 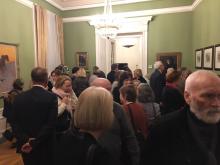 The art of Stanislovas Bohušas-Sestšencevičius (Stanisław Bohusz-Siestrzeńcewicz) has recently been attracting increasing attention of art critics. He is primarily known for capturing small towns in Lithuania and Ukraine, painting everyday life and the images of reality, be it oftentimes fictitious, or, according to art historian Jolita Mulevičiūtė, a “constructed reality”. Characteristic of him are lively, dynamic scenes and efforts to capture motion in the moment.

“The Little Faun” is a completely different kind of painting. With this piece, the artist approaches late 19th–early 20th century symbolism, it shows features of the Art Nouveau movement (also known as Jugend or Secession). The painting depicts a mythological creature known as a faun, sitting by a stream and thoughtfully watching his reflection in the water. The picture is steeped in melancholy, sadness and, at the same time, some unfathomable secret; it emanates a feeling of mystery of life and nature.

The faun is a creature in Greco-Roman mythology (faun in Roman mythology being the same as Pan in Greek mythology). He is a benevolent god of fertility, a patron of mountains and forests, fields and shepherds, a teacher of agriculture and a seer. Ever since Greco-Roman times, the depiction of a faun is common in art (especially since the 17th century) and has become a symbol of eroticism. He is frequently portrayed in the company of other forest deities, most often forest nymphs, his appearance is similar to that of a satyr’s - a bearded man with a goat’s horns and legs (less frequent are depictions of a young faun, they became more widespread in the art of the 19th century), living deep in the woods, in secluded grottos or next to bubbling creeks, where he would, presumably, tell the future.Bohušas-Sestšencevičius’ painting “The Little Faun” does not openly allude to eroticism, there are no hints of him chasing a nymph. The image of the faun as a child in the background of an autumn landscape evening creates a disturbingly dual impression, as if the painter was hinting at the end of the old, mythological world, built on the harmony between man and nature, but at the same time was talking about eternity. The picture is painted in a realistic manner, characteristic of Bohušas-Sestšencevičius, with brave, free strokes, masterfully conveying the texture of the depicted surfaces. An expressive colour scheme, as well as excellent composition emphasising the subtle harmony of lines and planes, become the main tools in creating the mood (Dr (hp) Rūta Janonienė, Senior Researcher, Institute of Art Studies, Vilnius Academy of Arts).