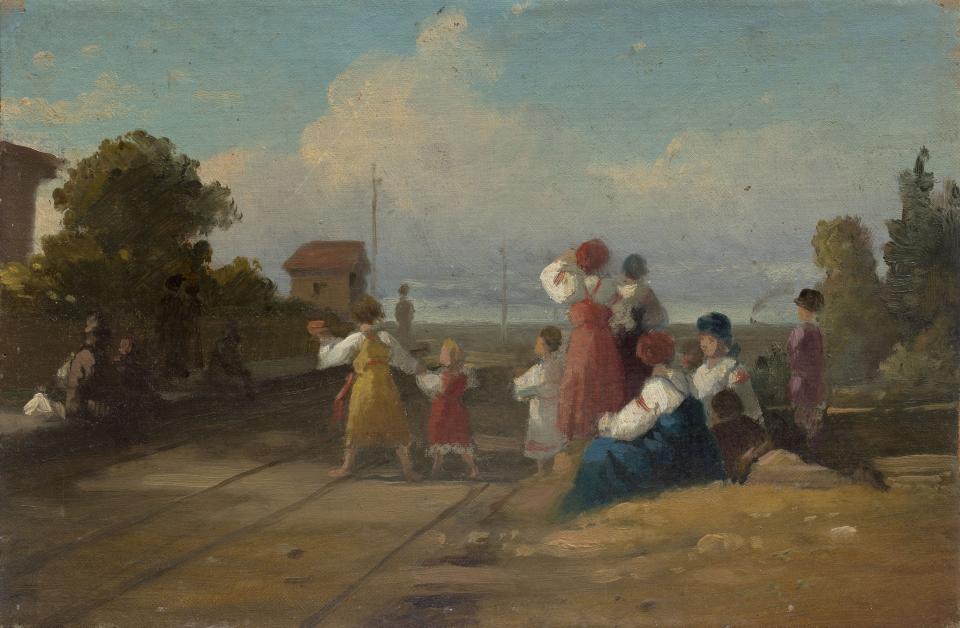 Born in 1827 in the town of Likhvin, Kaluga Governorate (Russia), died on 5 February 1912 in Vilnius. From 1845 to 1849, he studied at the Moscow Stroganov Technical Drawing School, and from 1851 to 1858, attended the class of painting battle scenes at the St. Petersburg Academy of Arts. In 1858, Trutnev won the Grand Prix, a grant for six-year studies abroad, and the title of first-class artist for his painting “The Water Consecration Procession in the Village on August 1”. He lived in Paris, Antwerp, Brussels and Rome, and travelled in the south of Italy before returning to St. Petersburg in 1865. From 1866, Trutnev worked as a teacher of drawing and calligraphy at the Vitebsk boys’ gymnasium. Soon he was invited to establish a drawing school in Vilnius. Up until his death, he was its headmaster and teacher of drawing. In 1868, the St. Petersburg Academy of Arts conferred him the title of academician for his paintings “People’s School” and “An Inn in Belgium”. In Vilnius, Trutnev was active in the local art scene: he organized exhibitions, presented tableaux vivants, and put effort into founding an art museum in the city. From 1876, he took part in the activity of the Vilnius Society of Permanent Exhibition of Artworks, was a member of its executive board, and one of the initiators and founders of the Vilnius Art Circle and the Memorial Mark Antokolsky Industrial Art Society. He maintained close contacts with the Russian art collector Pavel Tretyakov. Trutnev painted in the style of academic realism and created genre scenes, more rarely – historical and religious compositions, landscapes and portraits. His landscapes abound in realistic architectural motifs of Vilnius and other Lithuanian cities and towns, the majority of which are lithographed in Batyushkov’s album (П. Батюшков, Памятники Северо-Западного края, Берлин, 1874). Trutnev painted portraits of official persons observing the principles of academicism, while his other portraits are characterized by a freer painting style and more natural postures. A separate field of his work are iconostases and paintings of Eastern Orthodox saints: the great iconostasis for the Vilnius Cathedral of the Theotokos, icons for the Vilnius Cathedral of St. Nicholas, the Church of the Holy Spirit and others.