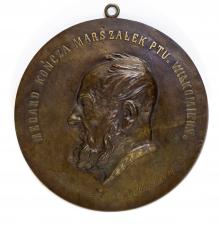 Signature: mongram "AR" (in the bottom-right side).

The relief is part of the national heritage of Lithuanian art and has an historical and artistic value.

One of the few sculptural works by Alfred Römer, this one depicting Medard Kończa, his brother-in-law and head of the landed nobility of Ukmergė County. All medallions by Alfred Römer bear images of his family members or people who were close and dear to him. Alfred Römer used to order his reliefs to be cast from bronze by Zimodra of Vilnius.

Medard Kazimierz Kończa, born on 4 October 1808 in Lokinė (near Siesikai), died on 18 March 1899 in Lokinė (near Siesikai; buried in Siesikai), a participant in the 1830–31 rebellion. Went to a Piarist school, in 1826 graduated the Faculty of Law at the Vilnius University. Mustered and commanded a squad of around 1,000 rebels in Ukmergė County. On 17–24 April 1831, was part of the botched assault on Vilnius. On 19 May 1831, was elected chair of the Rebellion Committee of Ukmergė County. On 23 May 1831, he and his squad joined the regular army under General D. A. Chłapowski (serving as his adjutant), on 19 June 1831 he took part in the Paneriai skirmish, later, in the Šiauliai skirmish. On 13 July 1831, he and the rebels retreated to Prussia, only to return to Lithuania soon after, where he was interrogated. In 1837–38, he was part of a secret society (most of its members were also members of the Supreme Committee operating in 1831). Was arrested in Vilnius in 1838, exiled to Velikiy Ustiug (according to other sources, to Vologda Governorate) in 1839. In 1843 (according to other sources, in 1845) he returned to Lithuania and took up residence in Lokinė. In 1858–63, was the marshal of Ukmergė County’s nobility. He did not approve of the 1863–64 rebellion, but spent nearly one year behind bars in Ukmergė, Vilnius on accusations of supporting the rebels as made by the authorities of the Russian Empire.