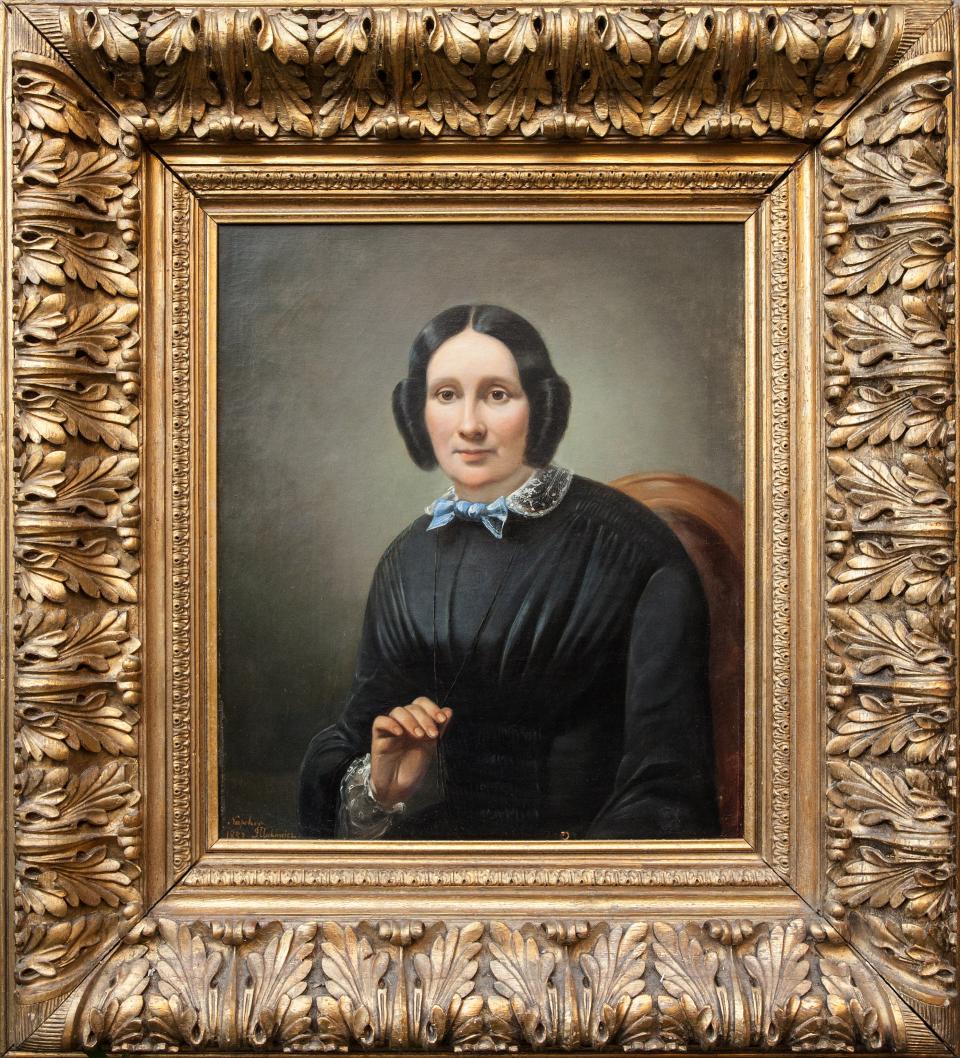 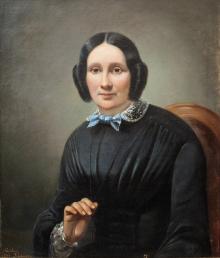 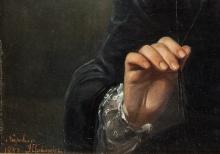 Portrait of a Woman

Signature: Napoleon Iłłakowicz 1852 (in the bottom-left corner of the painting).

The legacy of a troubled soul and participant of the 1831 Uprising, painter Napoleonas Ylakavičius, has finally been returned to Lithuania. The Portrait of a Woman, which was painted in Paris, is a valuable example of Napoleonas Ylakavičius’ mature period and reflects his typical manner of painting. The portrait shows an unknown woman, who was probably someone close to the artist, and displays a typical mid 19th century mixture of academic and realistic manner as well as traces of the Biedermeier style, which can be seen in the informal mood and the depiction of a simple, cosy home environment. The work is notable for the woman’s natural pose, thorough academic drawing manner,  lively facial expression, smooth brushwork, even surface, moderate colours, and sensitive approach to detail. The subdued colours and slightly brighter background create a kind of aura that surrounds the figure of the woman and allows the viewers to concentrate on her face; this reveals the artistic techniques the author had acquired in an academic environment. The artist not only skilfully captures the likeness, but also reveals the psychological state of the depicted woman.

The work was produced in the same year as the “Self portrait” (1852), which is preserved in the Lithuanian Art Museum and is the only work by Ylakavičius of that year in Lithuania. The painting is not only interesting as a work of art, but as a cultural artefact, as well - it is a newly discovered, previously unknown work from Ylakavičius’ sparse creative legacy that is scattered throughout Europe.

Reference: ARS VIA Art and Collectible Auction, description of the painting (by dr. Lijana Natalevičienė).

The life of NAPOLEON IŁŁAKOWICZ (1811–1861) is interesting and impressive. His work, which is hardly known today, enjoyed popularity with his contemporaries. As a young man, when still a student at Vilnius School of Art, he participated in the 1831 insurrection, and after it was suppressed he joined the Great Emigration. He furthered his art studies in France. Destined to travel from one country to another for many years, he combined his studies and his creative work with revolutionary and undercover activities everywhere he went. In 1852, he was instructed to leave France. He lived in London for a while, and executed commissions for the court of Queen Victoria. In England, he also became involved in manufacturing frames for paintings, and he even patented a technical improvement to the structure of frames. He associated with radical political émigrés, and produced portraits of famous émigré figures. In 1857, he and his wife Regina returned to Lithuania, but he remained under police surveillance until his very last days. His portrait of a woman in black shows his skill and his superb technique. The facial features and the details of the modest but elegant dress are minutely modelled, and at the same time the artist has captured a slight movement, of which the sitter seems unaware, which makes the painting look alive and natural.