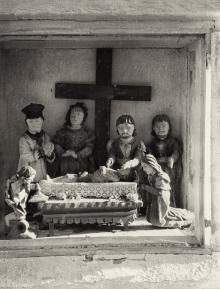 Our Lady of Sorrows, on the theme of Jesus is laid in the tomb

Photograph: from the shrine in the churchyard of Tauragė District, Pagramantis Church, carved by Juozapas Stankus, photograph by Juozas Petrulis, 1956.