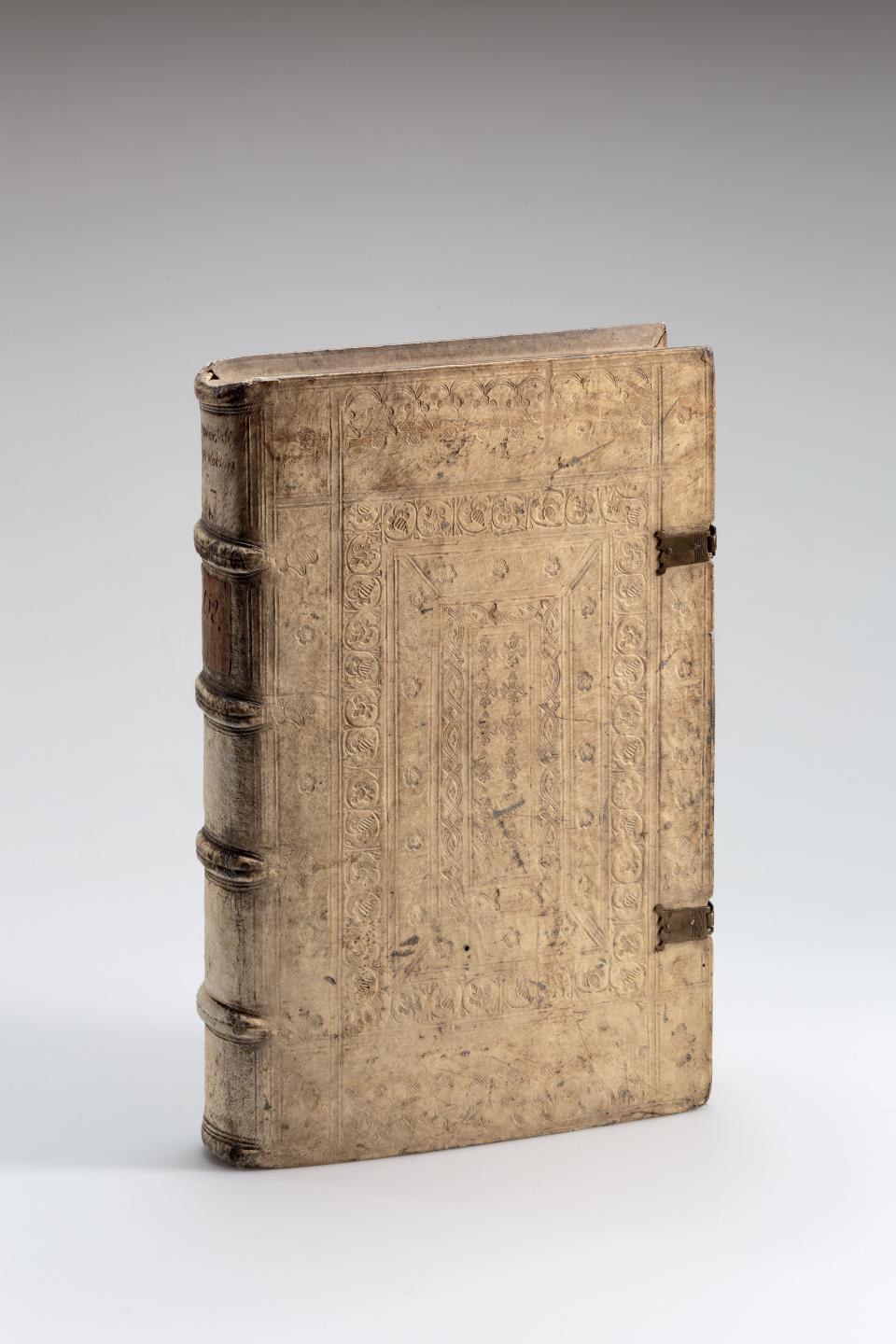 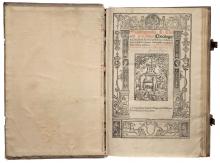 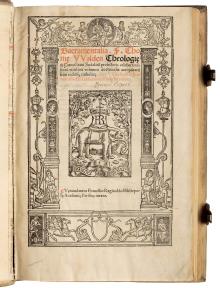 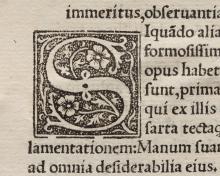 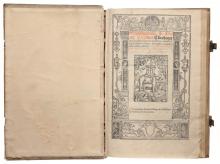 Title in English: The Sacraments. By F. Thomas Walden, Most Celebrated Member of the Order of Carmelites and Professor of Theology: Namely the Sixth Book on the Old Doctrinal Beliefs of the Catholic Church Against Witclewists and Their Follower Lutherans, and Other Heretics.

Binding: First edition. Fine contemporary elaborately blindstamped pigskin, both covers with four broad frames with various floral and other botanical stamps around a central panel containing two vertical rows of pomegranates, raised bands, old ink titling and paper label on spine, original clasps and catches. Historiated initials, title page in red and black with a charming woodcut border featuring grotesques and a laurel-crowned monastic at his desk, elephant device of Regnault.
Title page with early inscription of Howard Osgood and with round embossed stamp of Rochester Theological Seminary (fourth spine panel roughened where call number has been effaced).
Pigskin a bit soiled and abraded (also worn away at one corner and missing in three small places on boards), but an extraordinarily appealing contemporary copy, the blindstamping on the binding very sharp, the hardware in a perfect state of preservation, and the text exceptionally smooth, clean, and fresh.

This is a copy in exceptionally pleasing contemporary pigskin of a rare and important early large-format English theological item with direct ties to John Wycliffe. Written by an English Carmelite friar in the early 15th century, this study of the rites and practices of the Catholic tradition was directed against the innovations of the Oxford theologian and church reformer Wycliffe (ca. 1324-84); its principal fascination today is the light it shines on the beliefs of Wycliffe's followers, the Lollards. Topics covered include prayer, the various stages of the Mass, Baptism, ordination, Penance, the canonization of saints, miracles, and pilgrimage, as well as veneration of relics, the cross, and sacred images. The Lollards challenged Catholic practice in all these areas, calling into question whether pilgrimage, the burning of candles, prayers to saints, and veneration of their relics actually profited the soul. The most radical of their tenets, roundly denounced by Netter as heresy and blasphemy, was that the priest with his blessing of the sacraments was not a necessary intermediary between God and the worshipper. Thomas Netter (ca. 1375-1430, also known as Thomas Walden from the place of his birth, Saffron Walden) was well informed about Lollard doctrines and practices, as he both fraternized and argued with Lollards in his student years at Oxford. Later, when persecution intensified, Netter served as England's chief inquisitor, investigating Lollard leaders such as William Tailor and Sir John Oldcastle (executed in 1417). Netter became the confessor of Henry V, who, it is said, died in his arms, and Provincial of the Carmelite order in England. In 1419 he was sent as an envoy to Poland and Lithuania to shore up the effort to root out the heresy of the Hussites. He later joined young Henry VI in Rouen and died there. The learned Netter devoted his final years to the writing of his magnum opus, "Doctrinale Antiquitatum Fidei Catholicae Ecclesiae," comprising three books filling six volumes (the first book containing four parts), with our item being the third book. The work languished in oblivion for a century, but not long after Luther challenged the papacy with his "95 Theses" in 1517, a challenge that echoed many Lollard ideas, Badius Ascensius printed Netter's work for the first time, publishing the second book in 1521, the third in 1523, and the first in 1532. Renouard comments that Badius "appears not to have sought to make of the three volumes an edition forming a single whole, for the second volume is in gothic type, whereas the first and the third are in roman type." The publisher went so far as to give our volume a new subtitle reflecting his own times, as "against the Wicliffites and their adherents, the Lutherans." All parts of the "Doctrinale" are very rare, and to find a fine contemporary copy like the present one is next to impossible. (ST11088)