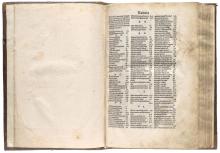 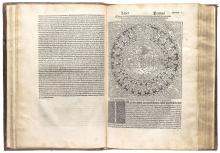 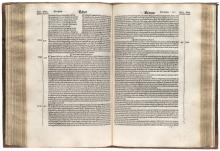 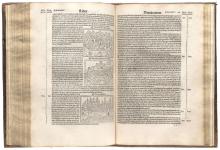 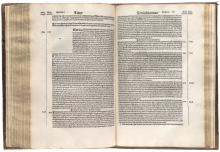 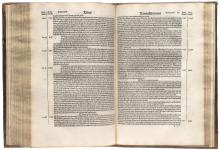 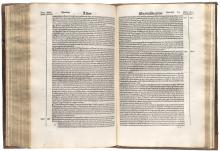 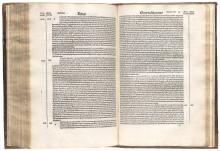 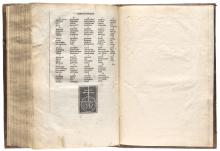 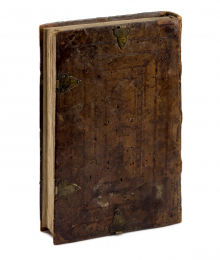 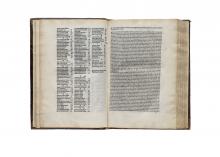 Title in English: Supplement to the Chronicle.

Format: Folio; 12 leaves (the first blank), 262 leaves (misnumbering, the last blank); several xylographic engravings within the text. The gutter margin of the first leaf slightly reinforced and a wise repair to the blank margin of the last four leaves, not affecting the text.

Second illustrated edition, enlarged: the text is updated to the contemporary days of the printing, such as until the year 1490. The Cronaca by Jacopo Foresti from Bergamo (1434-1520) is considered as the first universal history to be based on the new Renaissance thought. This edition offers the definitive version of the text, approved by the author, and a large iconographic apparatus, partially original. In fact, in addition to the series of engravings included in the first illustrated edition (Venice 1486), this 1490 print by Bernardinus Rizus provides an additional xylography representing the Babel Tower (l. 6v; cfr. Sander) and makes the views of the cities considerably better: "In 1490 Bernardinus Rizus of Ricius took over the book, and added an additional large scripture cut of the Tower of Babel and substituted some much better plans of cities, those of Rome, Venice, Genoa, and Verona being especially notable" (Dyson Perrins).

The iconographic apparatus of the book, then, consists of the large xylographic engravings representing the Creation, Adam and Eve and their expulsion from the Garden of Eden, Cain and Abel, the above mentioned Babel Tower, and of 63 cuts illustrating cities of the world. Among them, according to Sander, the ones concerning Rome and Venice are really outstanding.

Supplementum Chronicarum” by Jacopo Foresti from Bergamo, a reference book in the history of Europe. There are some specific passages in the text, where figures or historical events connected with the history of Baltic and Polonian areas are mentioned:

- Ancient times: Attila and the the Hunnic Empire, which used to stretch from the Ural River to the Rhine River and from the Danube River to the Baltic Sea;
- The migrations and invasions of Hungarians towards and throughout Northern Europe between VII and X centuries;
- The origin of Tatars: the so-called Lipka Tatars are a group originally settled in the Grand Duchy of Lithuania at the beginning of the 14th century. Towards the end of the 14th century, another wave of Tatars were invited into the Grand Duchy by Vytautas the Great. These Tatars first settled in Lithuania proper around Vilnius, Trakai, Hrodna and Kaunas and later spread to other parts of the Grand Duchy that later became part of Polish–Lithuanian Commonwealth. These areas comprise present-day Lithuania, Belarus and Poland. From the very beginning of their settlement in Lithuania they were known as the Lipka Tatars;
- Sigismund of Luxemburg and his politic towards Poland and Lithuania (XIV-XV centuries).

Supplement to the Chronicle by Italian monk Jacopo Filippo Foresti (1434–1520) is an encyclopaedia of general history that describes the world from its beginning to the end of the 15th century. The book is decorated with engravings depicting cityscapes and illustrations from the Bible.

Reference: "The Collection of Lawyer Jaunius Gumbis: the Past Preserved in Books". Museum and Collector - 7. Vilnius: National Museum of Lithuania, 2018, p. 20.

Published: "The Collection of Lawyer Jaunius Gumbis: the Past Preserved in Books". Museum and Collector - 7. Vilnius: National Museum of Lithuania, 2018, p. 20-23.