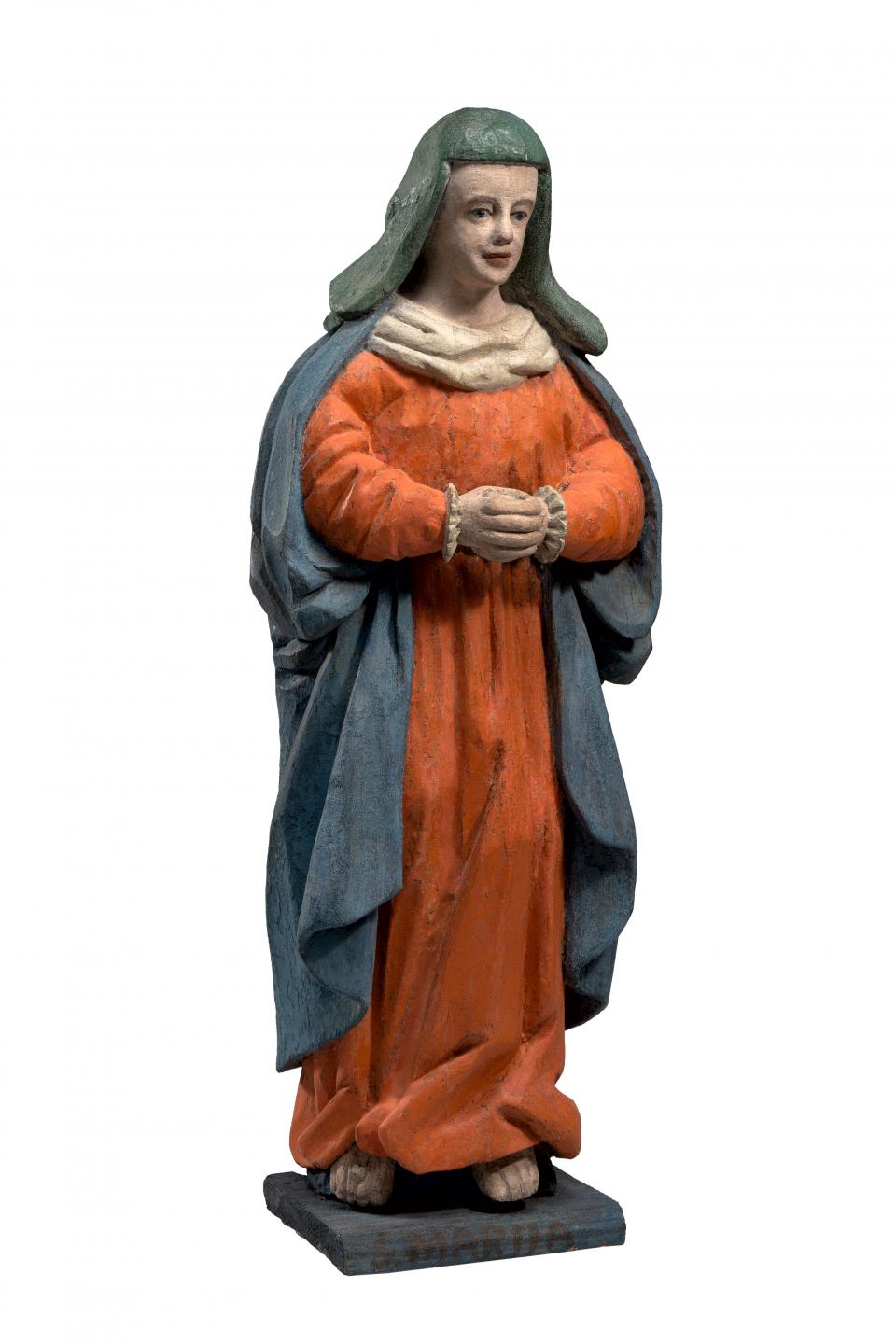 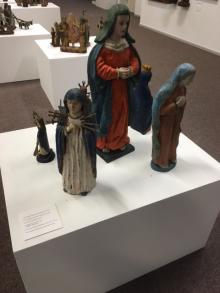 The sculpture of Our Lady of Sorrows was bought by an art collector in Kaunas. We would think that, in all probability, it used to belong to the church that was built in the town in the 17th century, its altar featuring a sculptural ensemble of the Crucifixion. As the church was being refurbished, St Mary’s sculpture could have been moved to the altar of the cemetery’s chapel, where it had long remained in use. This has evidence in the six polychromic layers found on the face. Notably, repainting old sculptures and their faces in particular was a common practice among the local artisans.

Our Lady of Sorrows is portrayed standing barefoot on a circular plinth attached to a double rectangular base. The posture of the figure is frontal, static, the shoulders are slanted. Mary’s arms are at her sides, resting against her waist. The large fingers locked at the front cover the waist-belt. She is wearing a red dress with an orange tint and longitudinal folds. One fold in the middle descends in a diagonal above the knee of her left leg, which is slightly bent. At the bottom, the folds break in diagonal edges that form acutely angular shapes. The wide, flared sleeves of the dress have deep, rounded folds. The cuffs of the tapered sleeves are decorated with white ruffle. The greenish shoulder-length head cover is folded softly at the sides. The pronounced horizontal part of the cover at the front reveals the brow of the young woman. The blue-and-grey cloak evenly covers the back and the shoulders of the figure. Round at the elbows, the folds of the cloak meet at armpits and run down the length of garment to be shaped in waves at the bottom. The red-and-orange hue of the dress coordinates famously with the tones of the head cover and the cloak. The folds of the broad white collar highlight the gentle neckline. Mary has a long, narrow, symmetrical face. The slightly drooping eyelids accentuate the far-away gaze. Portrayed in a sensitive and realistic manner, the facial features create an impression of a gentle, intimate mood.

The artistic plastic of the sculpture of Our Lady of Sorrows mirrors the baroque traits of the GDL that were commonplace in sculptures carved by the local artisans of the 17th century. The works of learnt sculptors of the early-to-mid 17th century often feature imperfectly recreated, simplified forms of gothic, renaissance artwork that are subject to the artist’s own improvisation. The sculptures of Our Lady of Sorrows and St John Evangelist in the churches of Židikai (DV 1755; DV 1754) and Tytuvėnai (DV 1274; UK 9272; K 1905), St Catherine (IP 1134; LA 413/799) and St Elisabeth of Hungary (IP 1131; LA 413/796) in the church of Alksnėnai stand out in the primitivism of their plastic expression. The works from the mid-to-late 17th century are dominated by the sculptural trends of baroque that we can observe in the liberated motions and gestures, the rounded shapes, the draperies that descent in wavy folds. The works by the local sculptors in the GDL from that period are marked by a balance of movement, symmetry, soft, monumental planes matched to vertical lines and acute angles. The sculptures emanate internal peace and tranquillity. Such sculptures stand in the Židikai, Pievenai, Tryškiai, and some other churches. Samples made by provincial artisans in the mid-to-late 17th century that are similar to Our Lady of Sorrows can be found in the church of Pivašiūnai: Christ Resurrected (UK 32271; K 1247), St John Evangelist in Kėdainiai, St Archangel Michael in the churches of Ariogala and Merkinė.

In summary of these observations, we can guess that the sculpture of Our Lady of Sorrows can be attributed to an unknown learnt local artisan who worked in the mid-to-late 17th century.