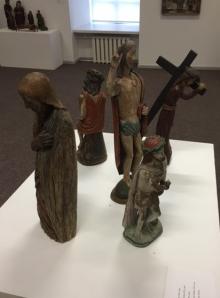 Jesus carrying His cross is an iconographic depiction of Jesus Christ reminding us of His path with the cross on his shoulders to the place of his crucifixion on the Mount of Golgotha. Soldiers fulfilling orders of the high priests of Jerusalem and the Roman Governor Pilate took Jesus along a longer path, so that more people on the streets of Jerusalem would get a glimpse of the convicted man.

Jesus stumbled several times and stopped while carrying His cross. Each stop on His way is called a station.

According to the Roman law the prisoner who was to be crucified had to carry his own cross, so immoral soldiers together with the Jews put the heavy wooden cross on Jesus’ shoulders. The Saviour, although almost dead, carried the heavy load as much as He could without saying a word. He demonstrated that each of us has to patiently bear our cross. In order to make Jesus equal to the criminals, the Jews selected two other prisoners to put to death with Jesus. When those unfortunate ones were on their way, many people went along with them: some wanted to crucify Jesus as a criminal, others wanted to rejoice at his death, yet others went to watch. There were those who went to cry for their beloved Jesus and to help Him as much as they could. Among them was the sorrowful Mother of God, St John the Apostle, Mary Magdalene, Mary of Clopas, Salome, Mary the mother of James the Less, and Joseph. Those holy women tried to squeeze through to Jesus, but the crowd did not let them. (Motiejus Valančius, „Žyvatas Jėzaus Kristaus Viešpaties mūsų“, Raštai 3, p. 505)