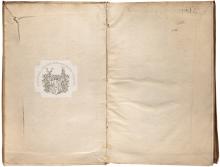 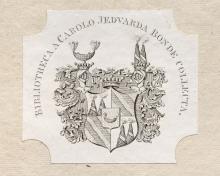 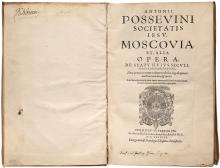 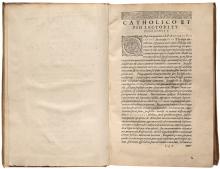 Title in English: Muscovy and Other Works, on the State of This Age, against the Foes of the Catholic Church.

The famous Ericsberg’s Castle library was amased in the period 1843-1913 by two generations of the baronial Bonde family, and became “one of the biggest and most valuable individual collections in Sweden”. (Carlander, Svenska bibliotek och exlibris, 1896-1904).

One of the earliest and most important descriptions of Russia in an excellent copy, in contemporary binding and kept in a noble library for more than a century.

The Jesuit Possevino (1533-1611) was sent to Moscow in 1581 on papal business, his mission being to mediate a dispute between the Muscovite Tsar and the Polish King, and also to encourage Ivan IV ‘the Terrible’ to go to war with the Turks and adopt the Roman Catholic faith. The present work includes many works and letters by Possevino next to ‘Moscovia’, here in its second, amended and enlarged edition. It contains a narrative of his negotiations and much material on the topography, people and other features of the State of Muscovy as well as of the Baltic and Poland. It also debates in length of the opposition between Catholic and Protestant faiths, discussing the works of Luther, Melanchton and Calvin.

Reference: "The Collection of Lawyer Jaunius Gumbis: the Past Preserved in Books". Museum and Collector - 7. Vilnius: National Museum of Lithuania, 2018, p. 423.

Published: "The Collection of Lawyer Jaunius Gumbis: the Past Preserved in Books". Museum and Collector - 7. Vilnius: National Museum of Lithuania, 2018, p. 422-423.