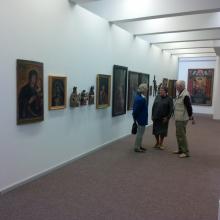 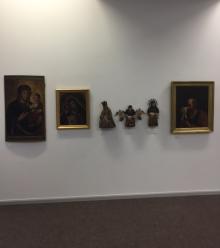 Pietà (mercy in Italian) is a subject depicting the pain of the Blessed Virgin Mary at the sight of Jesus’ crucifixion. The Mother of God is portrayed cradling the body of her Son following his removal from the cross. Mary is majestic – with a crown, a cross, and a halo with twelve stars. A white veil covers her head and a large crown with a cross at the top adorns her head. One or seven daggers piercing her heart symbolise the sorrows of the Mother of God. Mary is larger than Jesus, thus giving her the central role in the painting. Sometimes Our Lady of Sorrows is depicted with instruments of Jesus’ torture – the crown of thorns and nails. The composition of the Angelic Pietà is supplemented with two angels with candles.

...When the Blessed Virgin Mary and her friends saw a group of soldiers approach, they were frightened and thought they were going to do something to her Son’s body. But when they came and saw him dead, they did not do anything. Checking whether he was really dead, they told the soldier, Longinus, to pierce Jesus’ side with a spear. Longinus pierced the side and there was a sudden flow of blood and water, but Jesus did not move. Our Saviour did not feel any more pain, but this act of the soldier pierced Mary’s heart and the hearts of those standing under the cross.