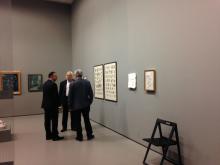 Signature: J Zikaras (in the middle right side).

The sculptor JUOZAS ZIKARAS (1881–1944) carried out many orders for the Church in the 1920s. He created several significant works on religious themes. He made this portrait of the Saviour in his favourite Classical relief style, which in European art was sometimes used to produce devotional images of saints: the subtly modelled head of Christ is shown in profile. It is bent and crowned with a crown of thorns. The movement, the crown of thorns and the expression on his face, radiant with quiet humility, make us realise that it is an image of the Suffering Christ after he has been scourged and mocked, and can be called Ecce Homo. The original moulds for this bas-relief are held by museums and some churches in Lithuania.