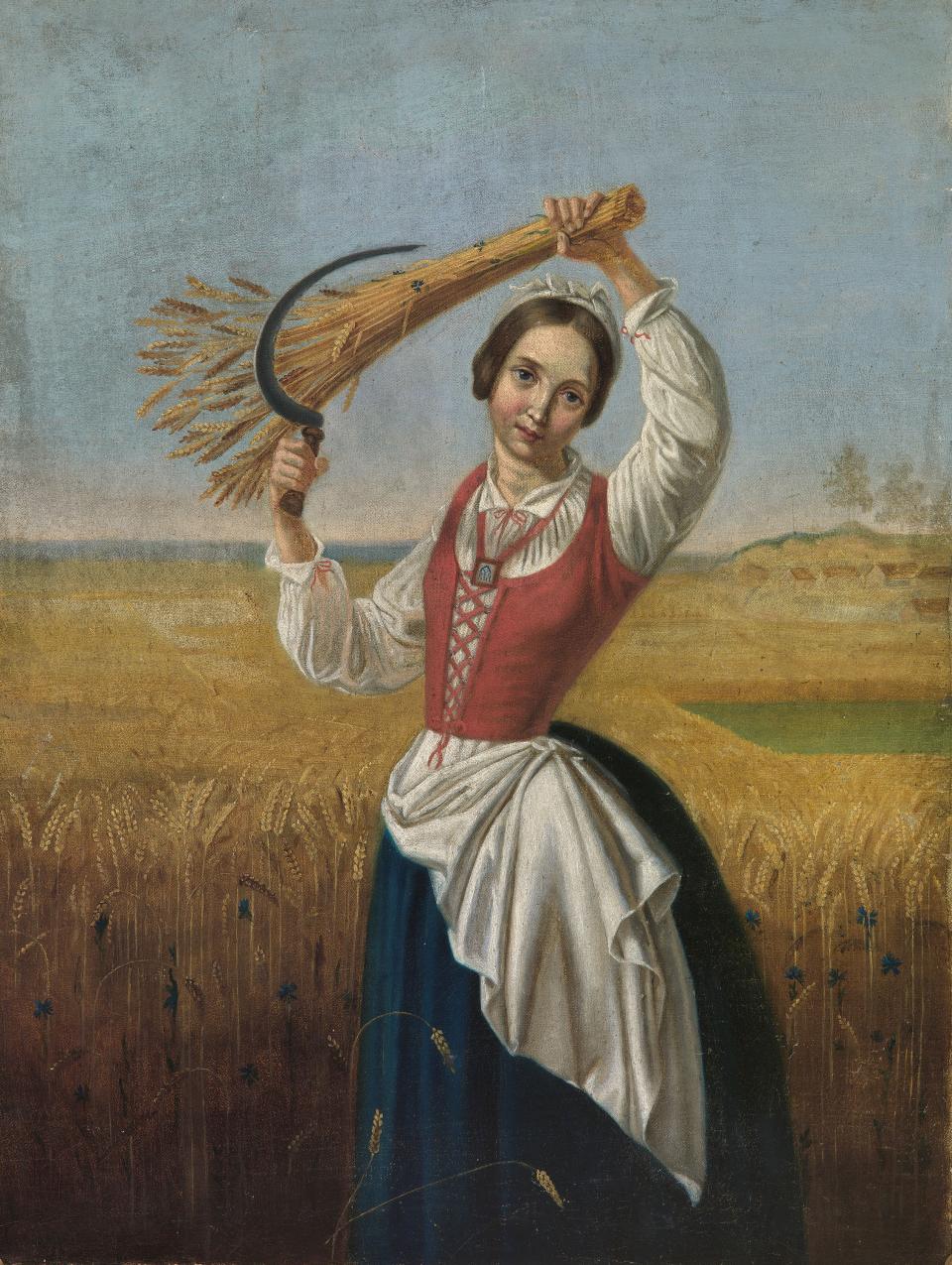 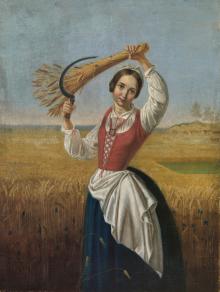 The harvester or reaper, frozen in a graceful pose, looks rather like a ballet dancer. This attitude towards a young Lithuanian country girl was undoubtedly encouraged by Kanuty Rusiecki’s (1800–1860) impressions and experiences from his Italian period (1822–1831/32). This picture is considered a classic piece of the Lithuanian artistic heritage. The version in the collection of the Lithuanian Art Museum is particularly famous. It has been reproduced many times, and circulated in the form of postcards and postage stamps, and at the end of the 20th century it was even reproduced on a box of Pergalė chocolates, thus becoming part of the popular consumer culture. The picture was also admired and valued by the artist’s contemporaries: there are several versions of The reaper in museums and private collections. There is a sepia sketch of the picture, dated 1841, in the Lithuanian Art Museum. Another sketch, Four reapers, dated by Vladas Drėma to 1844, can be found in folio No 30 of Ruseckas’ drawings of views around Pinsk, and is now held in the Vrublevskis Library of the Academy of Sciences. Another famous composition by Ruseckas, Lithuanian girl with palms (1847), in the romantic ethnographic style, resembles The reaper in all respects. The much later Fisherwoman (1856) has features of The reaper too. These two pictures are also in the collection of the Lithuanian Art Museum.

Reference: "More Than Just Beauty. The Image of Woman in the LAWIN collection." Compiled by G. Jankevičiūtė. Vilnius, LAWIN, 2012, P. 204.

Even his contemporaries deemed The reaper to be one of the best works by KANUTY RUSIECKI (1800–1860). These days, it is considered a classic example of Vilnius Romanticism. The various versions of The reaper reflect different stage in its making. In the mid-19th century, artists and intellectuals discussed the national style and the national school of art. Scenes from the lives of ordinary local people, and natural scenes in the home country, as recorded by artists, were expected to give art its local character. The reaper embraces different aspects of the ideal of local art. We see a familiar Lithuanian landscape, with a tall cross, birch trees with drooping branches, and a field of yellowing corn. We also know that this is a time of critical importance for farmers, the beginning of the corn harvest, and a village girl clad in traditional costume with a scapular on her neck shows that she is a member of the Catholic Church. The idea for the composition occurred to the painter in August 1844 while he was travelling, and watched the corn being harvested in fields near Slutsk (now in Belarus). The sketches he made from life were later developed in his Vilnius studio. It is fascinating to know that in December 1844, Rusiecki painted the Lithuanian costume of the reaper from life, using as a model the dress of a young woman who worked for his family as a seamstress. The artist’s imagination took his impressions from the harvest field, and gradually formed them into a festive, uplifting and poetic national ideal.

The artist was inspired to paint The Reaping Girl by the rye harvest he saw on the fields of the villages of Krasnodvorcy and Krivichi near Slutsk while on the way to his holiday destination in the region of Pinsk in August 1844. Rye harvest was a major communal effort and celebration in those days. Cutting the crop with sickles was a job for women. When cut, sheaves of rye would be placed in stooks to dry in the sun. The beginning of the rye harvest, and its end in particular, was marked by special rituals that were supposed to guarantee that the harvest would be good, and bread delicious. Twelve sketches of rye harvest done by Rusiecki during his voyage have survived to this day. For the final painting, the artist chose a composition featuring a single figure: a young reaping girl holding a sheaf of rye and a sickle above her head in the midst of work. The clean, tidy apparel, the graceful stature, the bright facial expression convey the inner beauty of the girl, respect for the earth, labour, and bread. The Reaping Girl captivated people of the period. Spurred by requests from his acquaintances and friends, Rusiecki made a few replicas of the painting. One of them was in the possession of Felix Rusecki, the painter’s brother, who wrote in his letter to Kanuty: ‘Samogitians kneel before The Reaping Girl, that’s how much they all love it.’ The Reaping Girl still remains one of the most popular 19th century works of Lithuanian art. It is probably safe to say that every Lithuanian is familiar with this painting. The painting’s popularity was also due to the fact that The Reaping Girl was probably the first work of Lithuanian art to be used in industrial design, adorning the cover of a box of chocolates by the confectionery factory Pergalės. In 2015, The Reaping Girl was on display at the world Expo 2015 in Milan, the show’s theme being ‘Feeding the Planet, Energy for Life’. Over the six months while the expo was running, over one and a half million visitors from all over the globe visited the Lithuanian pavilion and saw Rusiecki’s painting. (by Dalia Tarandaitė)