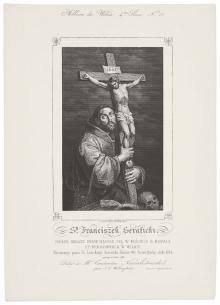 There used to be a picture of St Francis of Assisi, painted in the mid-17th century, on a side altar in the Church of St Michael the Archangel in Vilnius before the Second World War. In it, the meditating saint was portrayed with a large Crucifix against his shoulder. Jan Kazimierz Wilczyński chose the picture out of other famous pictures from Vilnius churches to reproduce in his Album de Wilna, and the drawing for the reproduction was made by Antoni Oleszczyński in 1850. This small picture, intended for private devotion, was based on the steel engraving published in Wilczyński’s book. The picture which had been on the altar in the Church of St Michael the  Archangel disappeared after the war, and its whereabouts are still unknown.