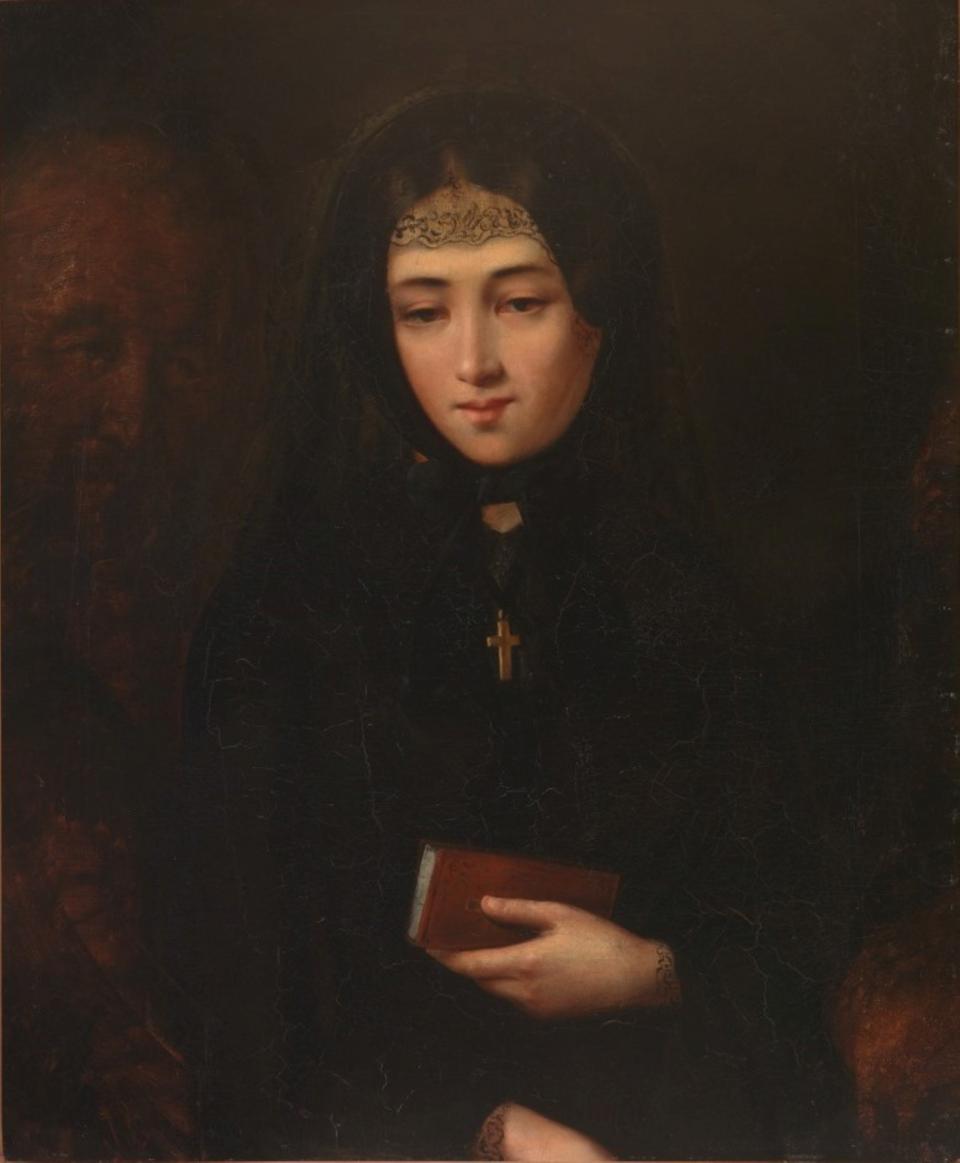 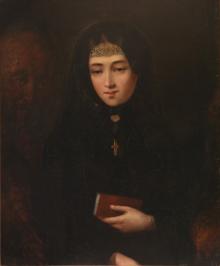 Created: first half of the 19th century.

Signature: in the top-left corner of the painting (the trace of the signature).

The portrait, conditionally titled Humbleness after the image of the woman shown in it, portrays a young woman dressed in the black attire of mourning, with a prayer-book in one hand. The plain cross adorning her chest highlights the theme of devotion to the will of the Lord and of faith further still. Quite possibly, this image was a part of a much larger composition that was cropped later (there are two figures of elderly men that can be glimpsed in the shadows on both sides of the woman). Judging by the portrait similarity, the woman in the picture could be Maria Elena Julia Mickiewicz, daughter of the poet Adam Mickiewicz and the pianist Celina Szimanowska, born in 1835 and married to the painter Tadeusz Gorecki (1825–1868) in the fall of 1857; she survived her husband and died in her home town of Paris in 1922. In 1855, her parents died one after the other, and in early 1856 Mickiewicz’s remains were brought from Istanbul to France to be buried at the Les Champeaux cemetery in Montmorency near Paris (in 1890, the remains were disinterred and entombed in the crypts of Wawel Cathedral). It was this period of grief and mourning that could have seen the making of the allegory of Humbleness, which breathes gentle sorrow and the solace of faith, the themes that are characteristic of other paintings by Gorecki as well.

The painting’s title Reverence was prompted by the image of a woman: young, dressed in mourning, with a prayer book in the hand. The simple cross on her breast emphasises the theme of faith, and trust in the will of the Lord. It is likely that this image was a part of a larger, and subsequently cropped composition (two elderly men can be discerned in the shadows on both sides of the woman). According to the likeness, the woman portrayed in this canvas could be Maria Helena Julia Mickiewicz, the daughter of Adam Mickiewicz and Celina Szymanowska, who married the painter TADEUSZ GORECKI (1825–1868) in the autumn of 1857, survived her husband, and died in 1922 in Paris. Her parents passed away one after the other in 1855, and in early 1856 her father’s remains were brought back to France from Constantinople, and buried near Paris in Les Champeaux cemetery at Montmorency (only in 1890 were they reburied in the crypt of the Wawel Cathedral). Reverence may have been produced during this difficult period of mourning. Emanating tender sadness and solace found in faith, the painting is connected by its theme with other paintings by Gorecki.