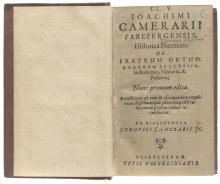 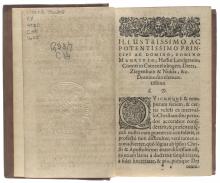 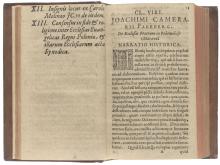 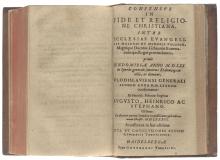 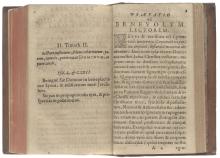 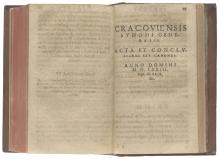 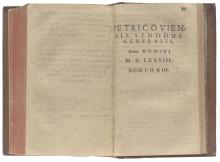 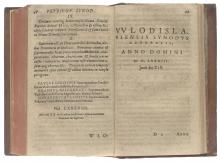 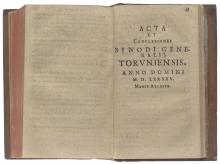 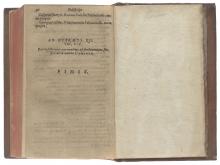 Title in English: A Historical Narrative; on the Churches of Orthodox Brotherhoods in Bohemia, Moravia, and Poland; Published Here for the First Time. With an Addition of Other Matters Worthy of Learning, Which Are Evaluated in Order on the Next Page After the Introduction, from the Library of Ludwig Camerarius.

Bound with Consensus in Faith and the Christian Religion, Among the Evangelical Churches of the Greater and Lesser Poland, the Grand Duchy of Lithuania, and Other Provinces of its Kingdom; First Consecrated in the Year 1570 in Sandomierz at the General Synod, Then in Others, and Finally Confirmed in the General Synod of Wlodislav in 1583… Added to this Edition Are the Statements and Conclusions of the General Synod of Torun.

First edition of this posthumously published account of the Moravian Bretheran and related religious groups, reformers, martyrs, etc. of the late 15th and 16th century. The work was edited by the author's son Lodovicus Camerarius who has also supplied a long introduction which is dated 1605.

The author was the eminent classical scholar and humanist, Joachim Camerarius (1500-1574), who had studied Greek under Richard Croke and Petrus Mosellanus. In addition to publishing numerous classical texts he had also assisted Albrecht Dürer in the publication of several of his works and was a friend of Erasmus (see Contemporaries of Erasmus, I, p. 247-8).

II. The second work, The Consensus of Sendomir, is essential document in the history of the Protestant Church in Poland and Lithuania which was drawn up at the Synod of Sendomir, April 14, 1570. The Lutherans (influenced by the liberal advice of the Melanchthonian divines of Wittenberg), the Calvinists, and the Bohemian Brethren effected a confederate union at the Synod of Sendomir and expressed in the present text which is the only important confessional document of the evangelical Churches in Poland and Lithuania. This edition contains the supplementary resolutions of the Synods of Posen (1570), Cracow (1573), Petricow (1578), and Vladislav (1583). "The Consensus sought to provide a defense against Romjan Catholics, sectarians, and foes of the Gospel, and also to obviate all strife and enmity. Each of the sects represented might conduct the worship and administer the sacraments of the other; each Church concerned might retain its liturgy and usages ... and all weighty matters of religion in Poland, Lithuania, and Samogitia were to be considered in joint council" (New Schaff-Herzog X, p. 356-7). These two works were published separately with the OCLC locating about a half dozen of the "Historia" and only three of the "Consensus in fide et religione Christiana".

The work A Historical Narrative on the Orthodox Brethren Churches in Bohemia, Moravia, and Poland by German humanist and reformat Joachim Camerarius (1500–1574) introduces the history the Protestant Czech (Bohemian) Brethren in the 15th and 16th century. The book also includes a collection of decisions (consensuses) of the General Synods of the Polish and Lithuanian Evangelical Reformed Church  Consensus on the Understanding of Faith and Prayer Among the Evangelical Churches of the Greater and Lesser Poland and the Grand Duchy of Lithuania (Consensus in fide et religione christiana inter ecclesias evangelicas Maioris et Minoris Poloniae, Magnique Ducatus Lithuaniae...). The most important of these is the Sandomierz Agreement, which was signed by the Bohemian Brethren and Reformats of Poland and the Grand Duchy of Lithuania on 14 April 1570, in a General Synod in Sandomierz. It was decided to regard the faith of the churches as righteous, preserve the dogma of the Holy Trinity, and hold mass in each other’s churches.

Reference: "The Collection of Lawyer Jaunius Gumbis: the Past Preserved in Books". Museum and Collector - 7. Vilnius: National Museum of Lithuania, 2018, p. 441.

Published: "The Collection of Lawyer Jaunius Gumbis: the Past Preserved in Books". Museum and Collector - 7. Vilnius: National Museum of Lithuania, 2018, p. 440-441.