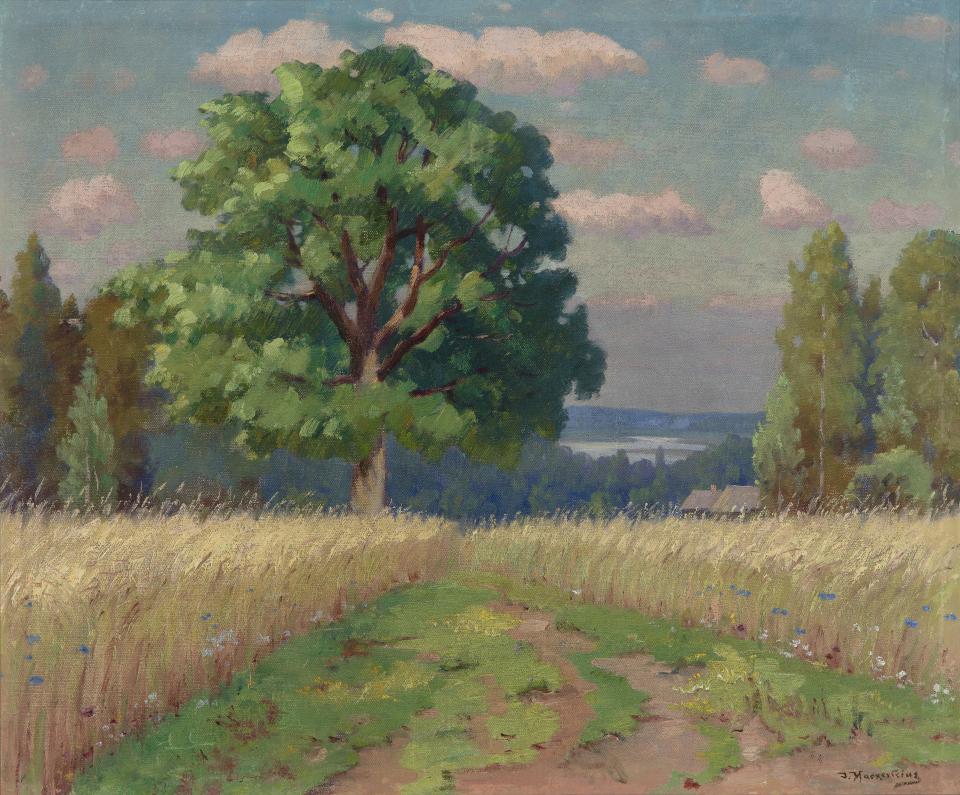 While still a student of the St. Petersburg Academy of Art, J. Mackevičius admired the romantic paintings of Arkhip Kuinji: the simple compositions, the harmony of colours, the magnitude of nature, the vastness of space, the early morning mood and the picturesque mountains of the Crimea and the Caucasus. From A. Kuinji J. Mackevičius learned to pay particular attention to sketches – the accord between an impressive composition and shades of colours. J. Mackevičius belonged to the A. Kuinji Society of Russian Artists (1909), lived in its summerhouse in the Crimea and participated in its exhibitions. From there, he sent his pictures to the first exhibitions of Lithuanian art (from 1909). Between 1910 and 1920 he lived in Italy and for the longest, in its southern part – the island of Capri. His Italian landscapes were displayed in personal exhibitions (1924 and 1926). They vary in artistic value (among them, there are pictures for tourists). The best of his landscapes reveal manifestations of impressionism in Lithuanian painting. J. Mackevičius learned impressionism from its primal sources: after finishing his studies in 1901, he perfected his skills in France and elsewhere in Europe and took interest in the works of impressionists.

Of all 20th-century Lithuanian artists, JONAS MACKEVIČIUS (1872–1954) must have been closest to the tradition of Russian Academism and the realism of the Peredvizhniki. Fleeing the First World War in 1914, he arrived on the island of Capri in the south of Italy, and remained there for 15 years. The natural and cultural environment helped him deepen the skills he had acquired in art schools in Moscow and St Petersburg. He returned to Lithuania in 1929, after accepting an invitation from colleagues to teach at the Kaunas School of Art. In Capri, he plunged into the study of material form with sincere passion, and painted almost only landscapes and still-lifes; but the beauty and abundance of nature there exceeded his artistic abilities, and, since his outlook had been formed by strict rules, he directed his attention to the work of his predecessors who had surrendered to the magic of Italy. Perhaps this is why his paintings were considered unoriginal, but they enriched interwar Lithuanian art with Italian light and colours, not to mention the exotic aura and unconcealed hedonism, which was appreciated in the years of austerity while the country was developing its statehood.